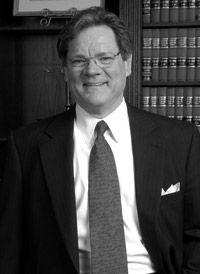 We mourn the passing of John H. Lonnquist. He was an incredible friend, mentor, attorney and colleague. We will miss him greatly.

With great sadness, we announce the loss of our beloved friend and law partner, John Lonnquist, who passed away on July 5, 2020. John is survived by his wife, Stephanie, his children, Kirsten and Sean, and six of his siblings.

John had an exciting and varied professional career. After graduating from the University of Nebraska, John took a job in New York City with Citi Bank then traveled South America as a bank examiner for two years. After a year at a printing company in New York, he returned to the University of Nebraska for law school. Two years later, he married Stephanie. Following law school, John clerked for Colorado Supreme Court Justice Donald E. Kelley and then joined the law firm of Caulkins, Kramer, Grimshaw and Harring. John left Caulkins Kramer for an in-house position with Johns Manville and later ran its Governmental Relations office in Washington D.C. coordinating the company’s asbestos litigation across the county.

Back in Colorado, John started his own firm in the late 80s and a few years later reconnected with his friend and Caulkins Kramer colleague, Jim Mallon. He and Jim founded Mallon & Lonnquist, LLC in 1991 and remained law partners for 20 years. The firm grew and became Mallon Lonnquist Morris & Watrous in 2013.

He will be greatly missed by his partners, colleagues, friends, and clients. He was an incredible attorney, business partner, mentor, and friend. John loved being an attorney and was good at it. He always remained pragmatic, professional, and light-hearted, while at the same time resolutely representing his clients. He was actively involved in both the Denver and Arapahoe bar associations. He was also a board member for the Cherry Creek Chamber for many years and later, an ambassador.  He would walk over to Cherry Creek North in his suit and tie from his Cherry Creek office whether it was horribly hot, raining, or snowing to greet new members and spend time with friends.

John was a proud father, avid reader, environmental advocate, Irish music lover (especially at loud volumes), and a friendly, fun-loving extrovert. During John’s extensive career, he never hesitated to get to know people at various gatherings by asking perfect strangers, “Is there anything you’d like to know about anything?” The question never failed in getting a laugh, and often earned John another new friend or client. He will be remembered for his irreverent humor, excellent and often off-the-wall storytelling, camaraderie, and friendship.